So let me take you back to a very rainy miserable morning, 7 am early November 1968!!

I had just completed four intense months of boot camp like conditions at the Police Academy at the old RAF station, Dishforth, Yorkshire, England.

Graduation parade I shall never forget.....five minutes of precise close quarter drill without any commands........and then it was over I was now officially Police Constable 446 of West Bar division Sheffield City.

My parents were very proud of me even though I did not become the next Pele of the football world......

They rewarded me for my graduation a brand new Honda moped

In the Ecclesfield Road division at 7 am to sign on for my very first shift.

It was raining very hard and across from the police box was a row of houses with an alley in between and I decided to leave my moped in the alleyway out of the elements.

My first duty was traffic control which I managed to get through without causing any collisions.

I then decided to go back to the police box and go ask the owners of the house where I had left my moped if it was OK to park there.

It was still raining heavily and I was cold and a tad damp.....I walked down the alley and at the end the alley turns right or left to two separate houses.....and I turned right and the door to the house was ajar maybe 12 inches......I knocked on the door and a man around 40 years of age came to the door smiling and saying hello officer.....

I explained to him that it was my bike in the alley and was it alright to leave it there for the remainder of my shift.....

The man smiled again and said of course anytime you are working here and as is the custom in England he said do you want to come in for a cup of tea????

Now remember I was cold, wet and could have murdered a cuppa....BUT...I told him thanks but this was my very first shift and I did not want to get into trouble with my Sergeant on my first day........

This man smiled a lot and said he totally understood but anytime in the future I was welcome for tea......I thanked him and went about my morning.

As I was walking down the high street feeing very proud of myself saying hello to the kids and shoe owners and thinking I had finally made it in this big industrial city.

Around noon I returned to the Police box as that is where we had our lunch and wrote reports...

I was enjoying the first packed lunch my lovely Mum had made and found a “We are proud of you son” note in my biscuit box.....could it not get any better???

There was a loud knock on the door and with a mouth full of chocolate digestive biscuit I opened it to find a very upset older lady crying and sobbing and saying she had been robbed.

Oh my I though not even completed my first shift and here I was with a robbery on my hands I must admit I did think solve this and you are destined for the detective branch....

I tried to console her and asked where she lived and she told me across the street down the alley where my moped was.....I walked with her holding her hand and saying words of encouragement.

When we got to the end of the alley she turned right and we went into the house where I had spoken to the man a few hours ago.....she was a bit more settled and told me that she had left this morning for a church meeting and when she came home she found the door open a bit and her radio, gas money and jewelry were stolen.

My first question to her was your husband home this morning and she looked at me forlornly and said he passed away eight years ago she lived alone.

Obviously the man who had opened the door to me and offered me tea was the robber.......what was I going to do I could not tell anyone but I had a perfect description of him but could not put that in my report......and then I thought what would have happened if I had accepted his offer of tea????

I was devastated remember I was a naive 19 year old kid......I reassured the lady that I would do my upmost to apprehend this nasty man....

Took all the details and when I left her she was a little calmer.  I completed the burglary report and continued with the rest of my shift but the swagger in my step had gone and I questioned if I was cut out for this profession.

This story does have a happy ending..about a month later I was on a night shift reading the police magazine and I see a photo of a man who I recognized right away, the thief.....Ronald Henry Jarvis had been arrested the previous week and admitted to over thirty house robberies in the Ecclesfield area.......Justice prevailed!!

Today is the start of the US tennis open..so you know how I will be spending a lot of my time....
This is my post from when I attended this event in New York, fond memories!!

Well my last day in the Big Apple was rainy and cool!!!

I started packing this morning and around noon got on my final bus and train to the stadium where I had a 25 dollar grounds pass and I watched some great matches in the second largest covered stadium and as you can see my seat was maybe the best in the house!!

I saw the junior boys final which was highly entertaining!! 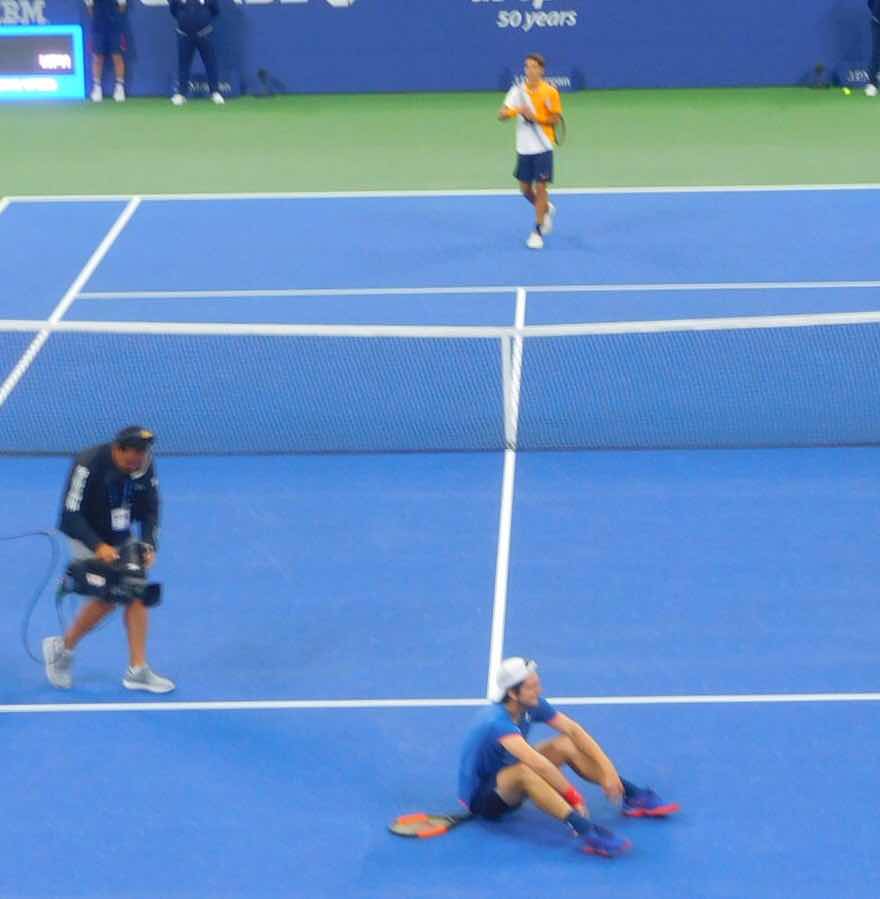 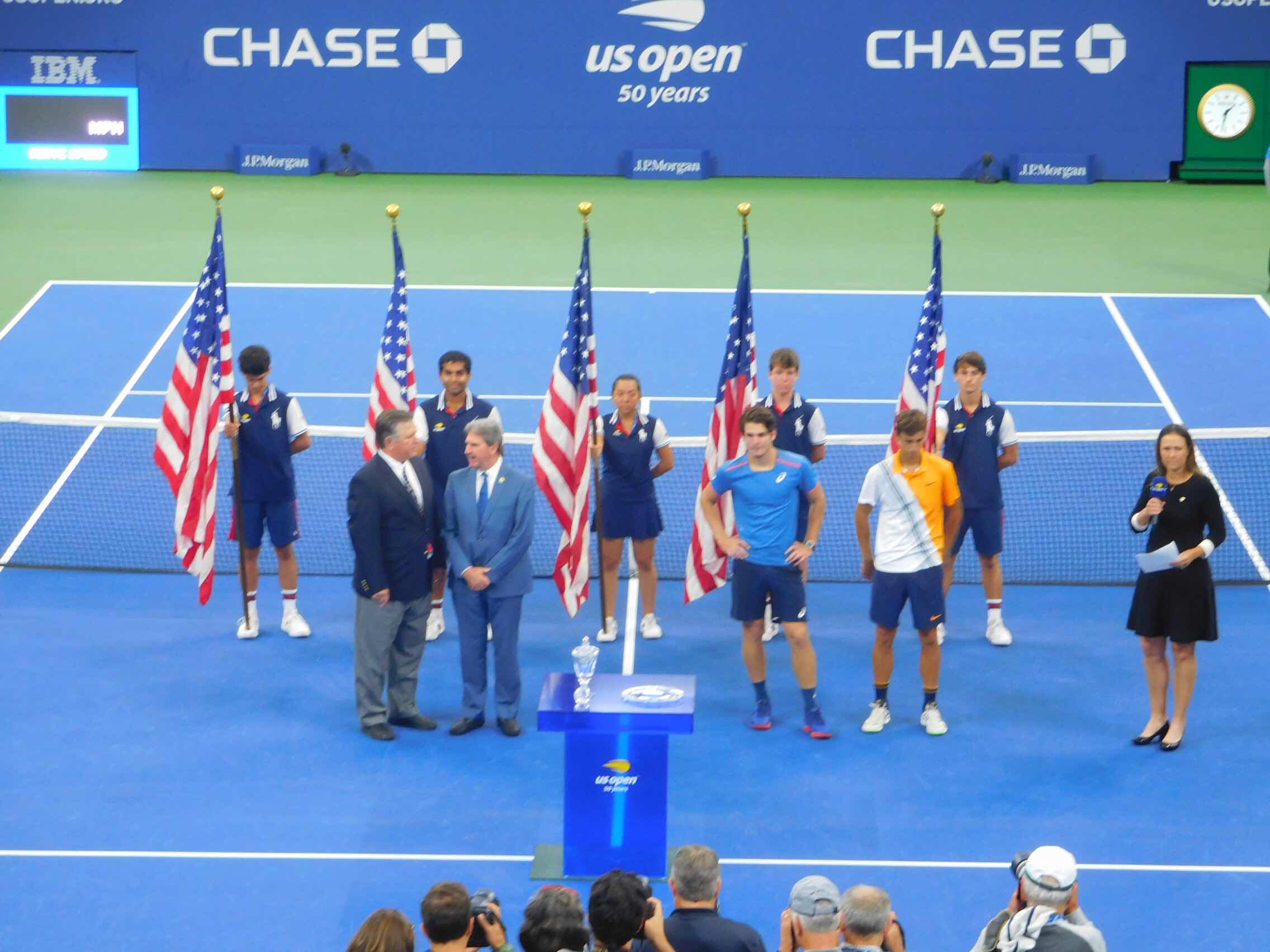 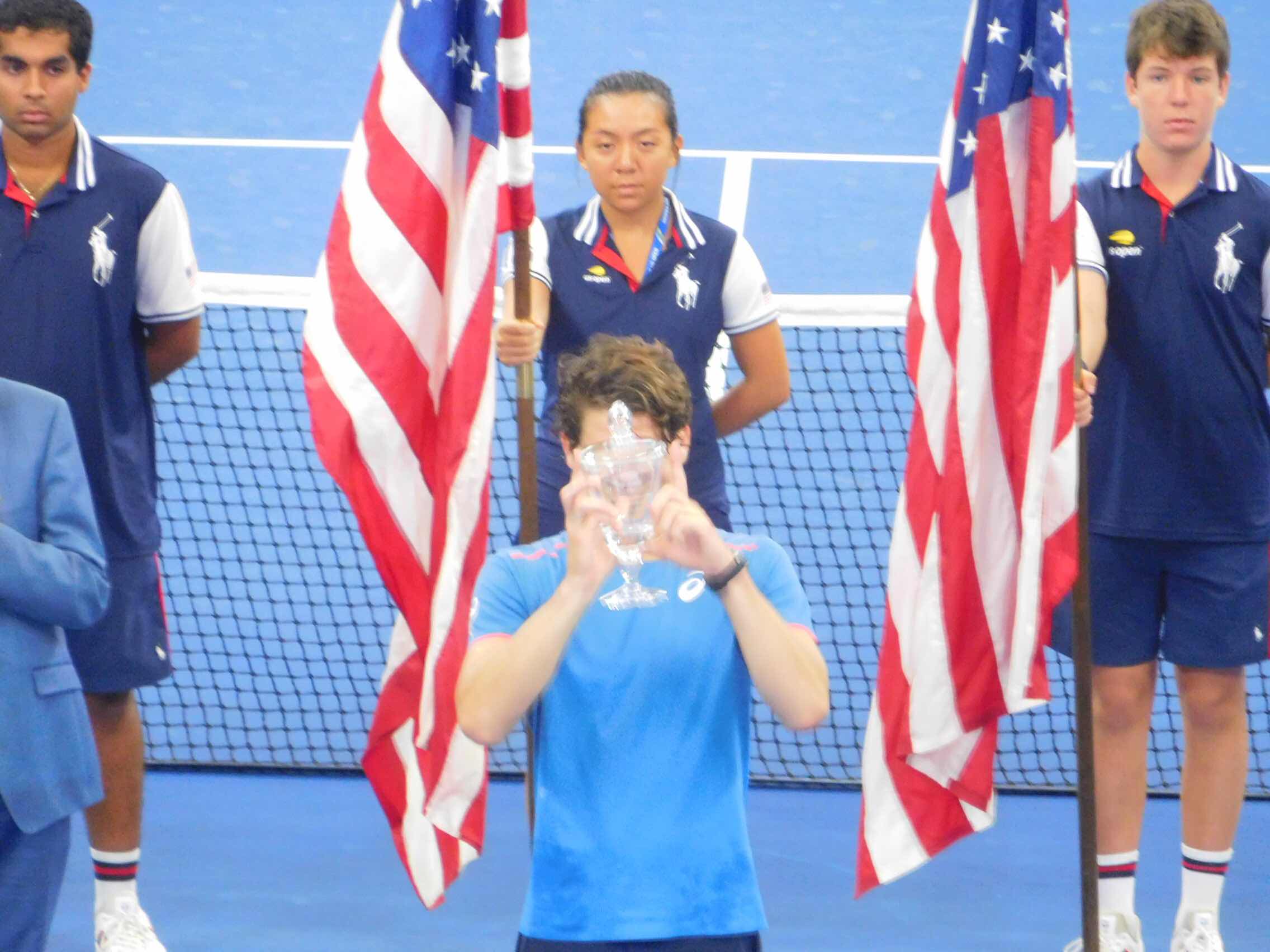 I also saw the junior girls final another good game but I could not stop think Ashley could have been in this final she is still eligible and I have no doubt she would have beaten both of these opponents had she been healthy and not injured!!

Walking around the grounds I saw this live interview with perhaps my favourite player of all time...if you need to ask🤢🤢🤢🤢 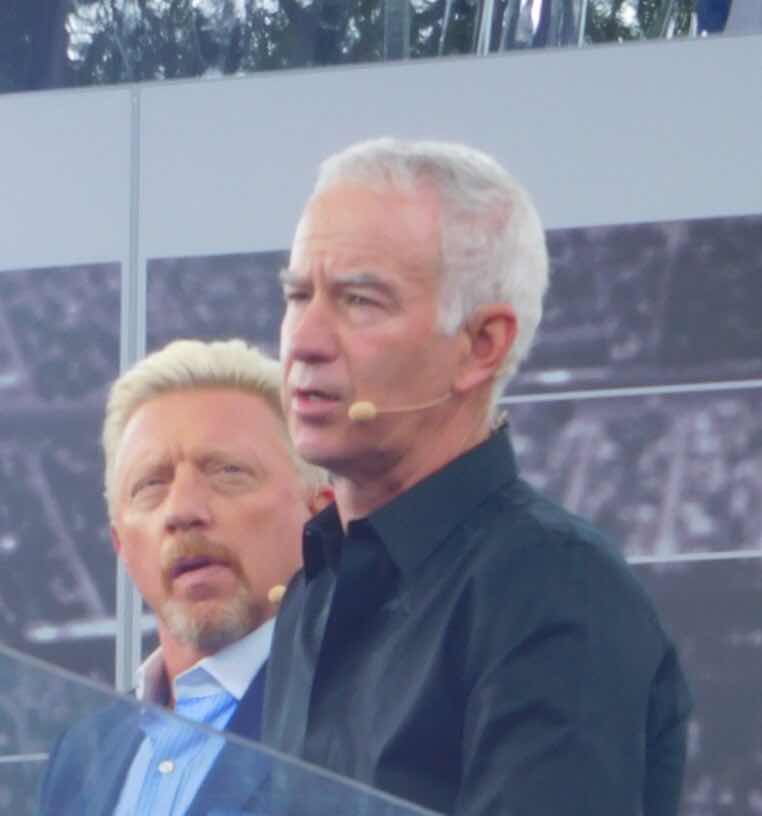 I then walked around for a while and came across this scene.. 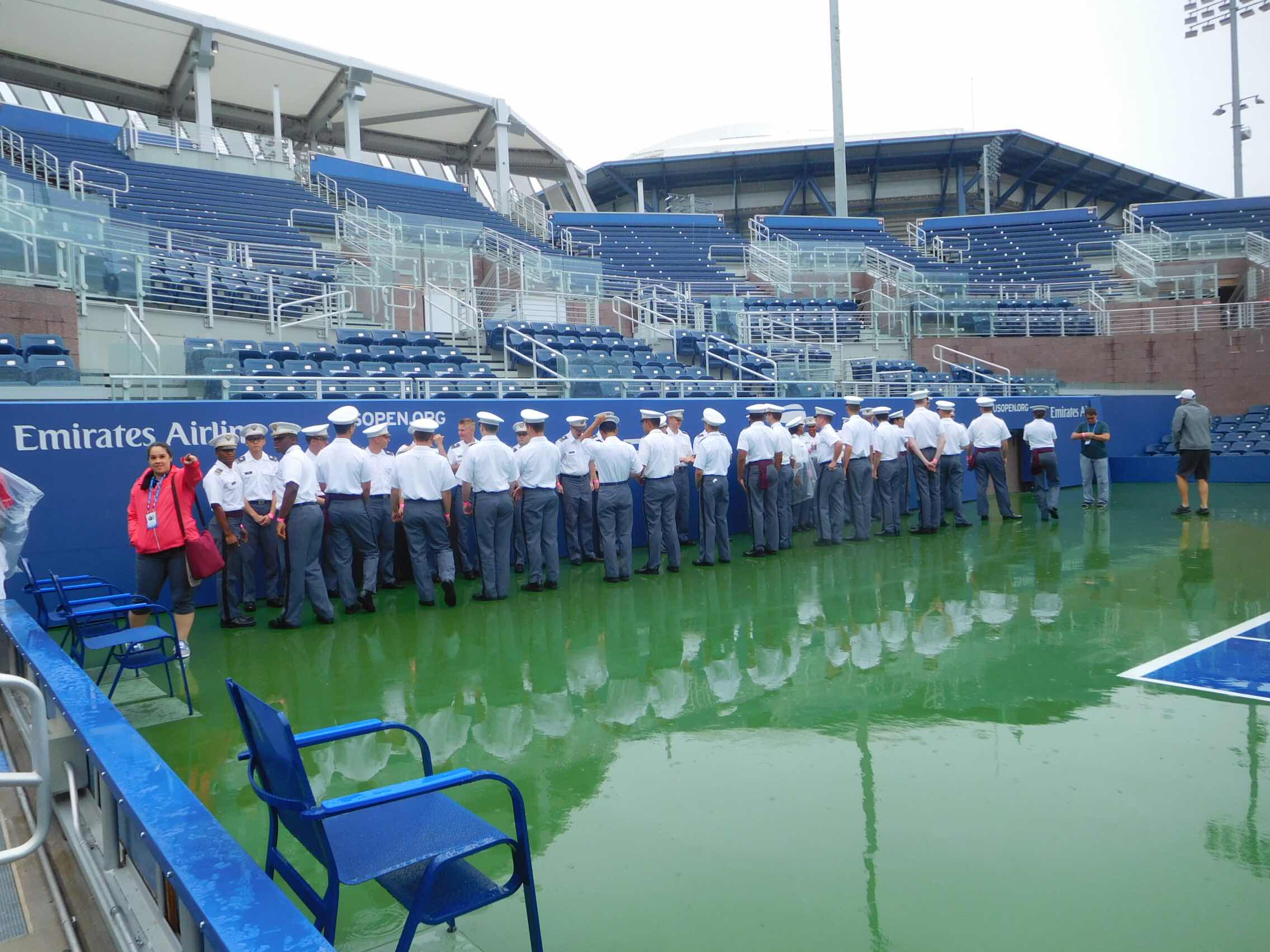 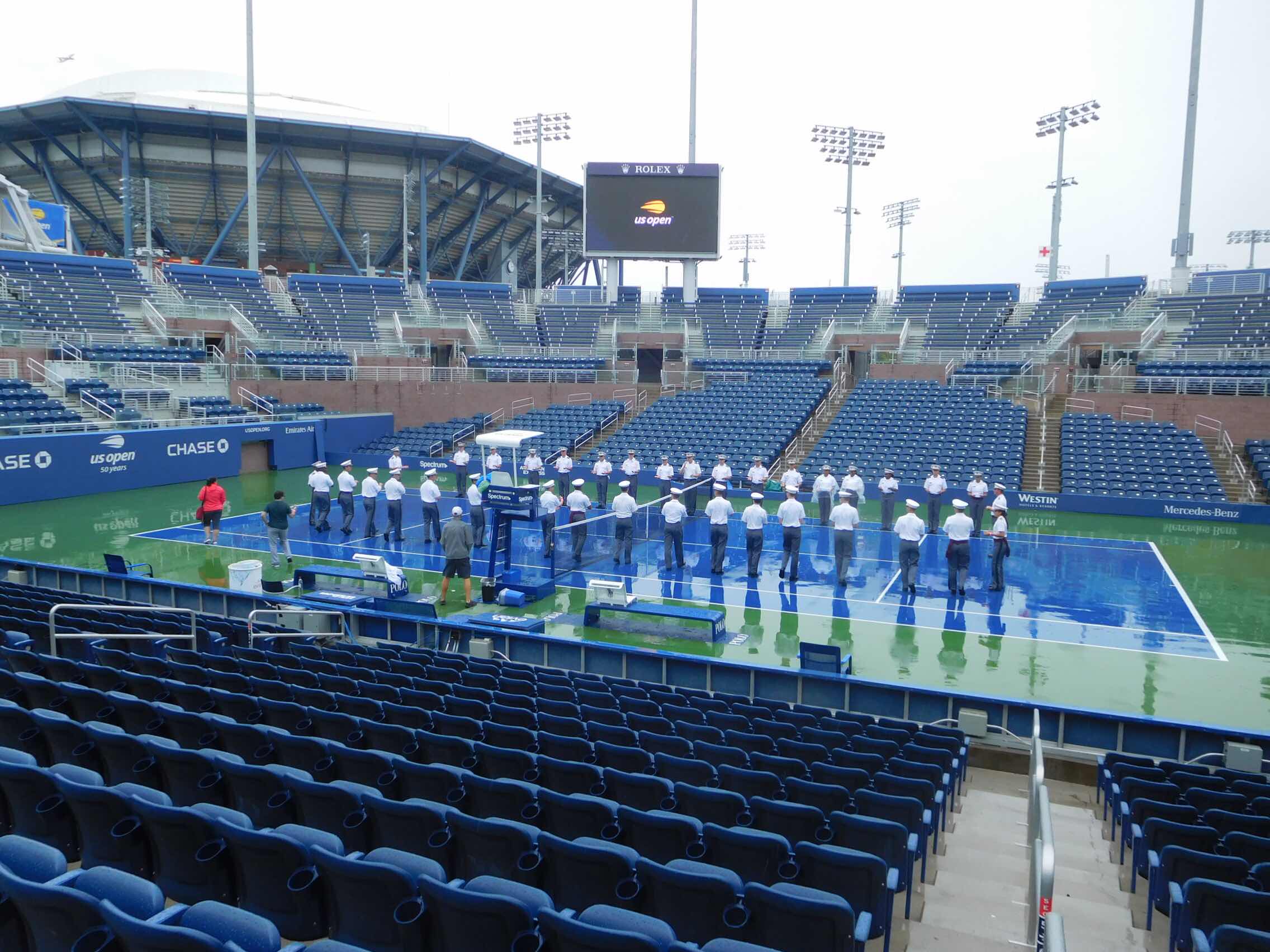 Who are they and what are they doing??  See below!!

Then because my plan to sit outside and watch the big screen was thwarted by the weather I again found what I consider the best seat in the inside lounge to watch a fabulous women’s doubles final!! 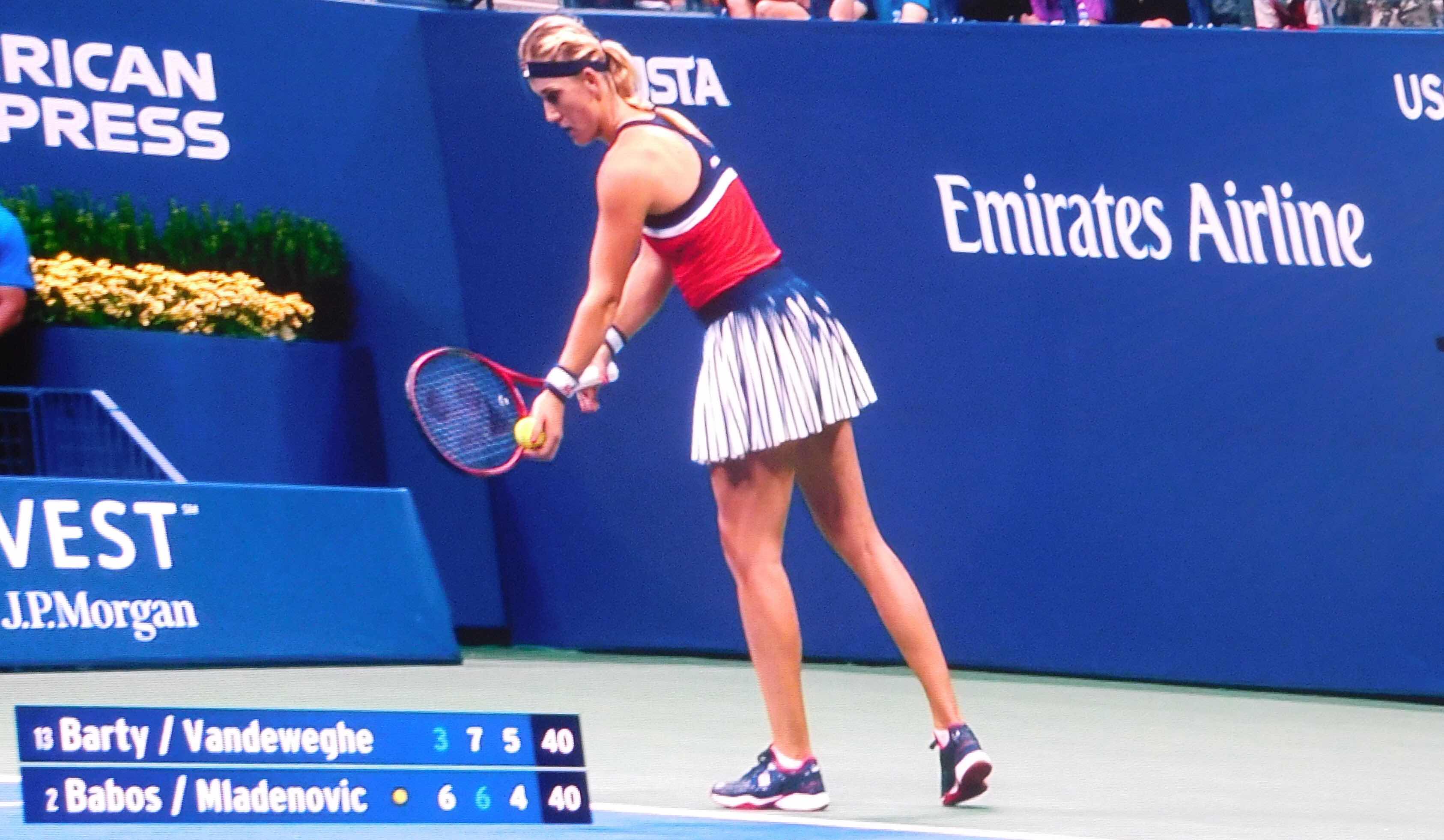 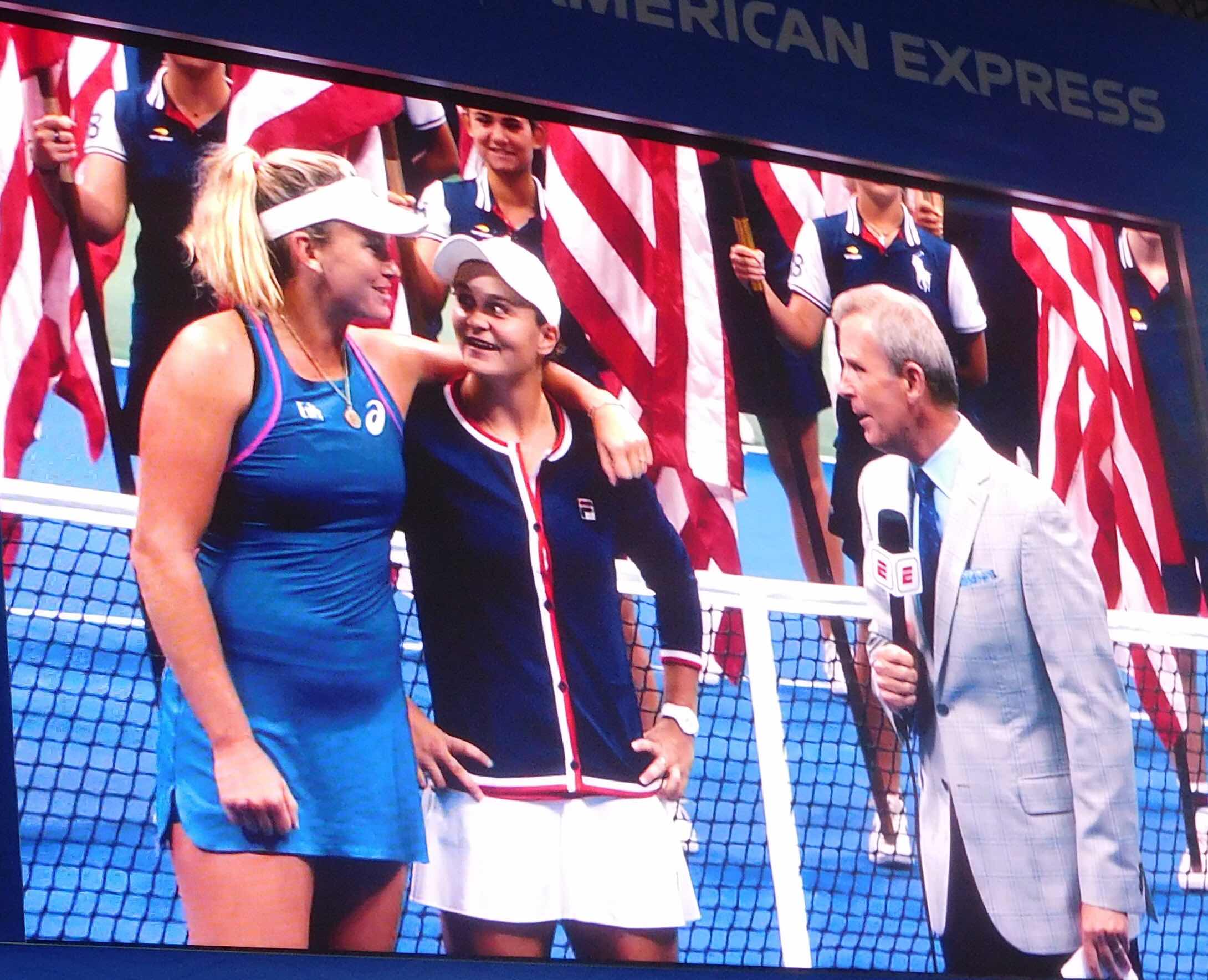 Then came the finale...the final of the men between Novak and my favourite DelPotro

unfortunately on this afternoon there was only going to be one winner and Novak deserved his slam..well done!!!

I am sure you have read all the stories about the women’s final and the behaviour of Serena and I will chime in with my two cents worth...

Her first violation was for being coached which she denied vehemently but her coach admitted to in the press statements after the match...

Her second violation smashing her racket....nothing to say she did it..

Her third violation and the one I have to admit being a tad biased towards the umpire was calling him a thief and a liar......as a pretty high ranking soccer referee, retired, I was always letting the players vent a little if they did not agree with my calls I am human I made bad and wrong calls what I would not tolerate was them questioning my honesty.....in my opinion Serena went over the line on this one and was rightly docked a game....

The two conclusions I draw from it all is that maybe there is a different standard for the men but that was not the place to loose your cool she needs to remember she is the heroine of so many girls and secondly and I think the biggie...is the reason for her tan5rums is that she was getting beat my a much better opponent on the day!!!

I saw Osaka live in England a few months ago and she is going to be the next one but she needs to work on her acceptance speeches she is so shy.....

There you have it my opinion!!

Little Bluey is just about packed and ready to hit the road tomorrow on the start of my journey to SMA my destination tomorrow is in the mountains of Virginia at a town called Charlottesville!!!!

In a few days I will post my thoughts on NYC!!

I like my Sunday drives......sometimes to a mystery destination ...

but today I went to a trail of a hike I have not done for over four years ..

The destination of this hike is an abandoned Jesuit settlement from the era of the Cristo War.

It was about a 45 minute drive along well marked tracks to the start of the hike heading into the canyon....

Then into the valley where some ruins are well kept...

Animals on the way back...

I really enjoyed this hike and the great news is that the k eye feels fine but still taking the next week off tennis....

Speaking of tennis you have been warned....the US Open starts in New York tomorrow for two weeks and I shall be doing plenty of watching and remembering I was there a few years ago...

Saturday with only walking Frida on my calendar ......

I love my little casita and the view from my breakfast table.......

BUT this lovely white flowered bush is actually on the next door neighbours property but overflows to my side of the wall...

So at least twice a day I have to take five minutes and sweep the whole steps.....

Looks good when I am finished....

Finally the view from the roof top..

And you thought retirement was easy!!

This morning I packed up some food and drink and off on a mystery tour to find a waterfall I had read about on the Internet.....
My route...

When I got to the little town of  Tarimoro I had to ask a couple of times but found the entrance to the falls quite easily...

my knee felt good but I was happy it was only a short walk to the lovely waterfall.....

Do you see a hand in the above photo?
How about now?

I tried to find a track to the top of the falls but could not...

It was good to be the only person there...
On the way back I saw this dam...

I enjoyed my day and when I came home I put up my Mexican Independence Day banners even though I know there will be no parades next month....

Took Frida out for our regular walk.. 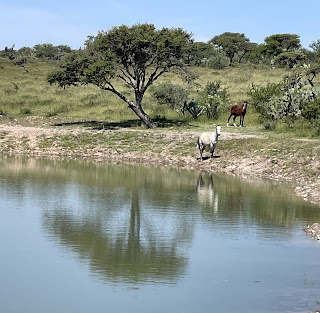